NACO Announces Derrick Hunter as Angel of the Year 2019 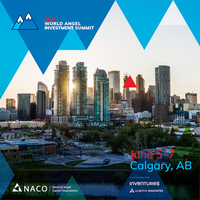 Calgary, AB, June 6, 2019 – Derrick Hunter, CEO of Bluesky Equities, one of the most active early-stage capital investors in Alberta, is named 2019 Canadian Angel of the Year.

The 2019 Canadian Angel of the Year Award, sponsored by BDC Capital, recognizes an early-stage investor that has made a significant contribution to the growth and development of the Canadian entrepreneurial ecosystem through a combination of investment, mentorship, and leadership within their local community.

Derrick Hunter was selected from NACO’s growing membership of over 4000 angel investors. “Over the past nine years, NACO members have made 2224 investments in 1472 companies totalling more than $853.3M of direct investments to support entrepreneurs who wish to scale their companies,” said Claudio Rojas, newly appointed CEO at NACO. “Angel-backed companies between 2010 and 2017 generated $1.66B in revenue and created over 7700 jobs. This award recognizes Derrick Hunter’s contributions to entrepreneurship, job creation, and economic prosperity in Alberta.”

“BDC Capital is proud to sponsor again this year the Angel of the Year award,” said Jérôme Nycz, Executive Vice President at BDC Capital. “Kudos to the leading role angels play in the tech ecosystem.”

Derrick Hunter, based in Calgary, Alberta, is President and CEO of Bluesky Equities Ltd and Founding Partner and Fellow at Creative Destruction Lab – Rockies, located at the Haskayne School of Business, University of Calgary. Mr. Hunter has been an active member of the local investment community for many years and has invested in more than 50 entrepreneurial ventures. His company, Bluesky Equities is also one of the most active angel investors in Alberta. Derrick previously co-founded Wild Rose Properties with a portfolio valued in excess of $1 billion.

Derrick sits on the External Advisory Boards of both the Hunter Centre for Entrepreneurship and Innovation at the Haskayne School of Business and the Hunter Hub for Entrepreneurial Thinking at the University of Calgary. He also serves as a Director of Futurpreneur Canada, the Beakerhead Creative Society, the Alberta Cancer Foundation Charity Classic and the University of Calgary Energy New Venture Competition.

Derrick is a graduate of Queen’s University and the University of Calgary. He is a member of the Association of Professional Engineers and Geoscientists of Alberta and was the recipient of the 2018 Management Alumni Excellence (MAX) award from the Haskayne School of Business.

Mr. Hunter was recognized at NACO’s Annual Gala Awards Ceremony on June 6th, 2019. The gala is part of the World Angel Investment Summit, an annual event that attracts over 350 investors from across Canada, the U.S., Latin America, and Europe. This year, the World Summit took place in Calgary, one of Canada’s fastest-growing, most entrepreneurial and innovative cities, with the highest number of patents filed per capita in Canada.

For more detailed analytics on early-stage funding in Canada or to arrange an interview, please contact: Johanna McFarland, media@nacocanada.com (416) 581-0009 ext. 6

NACO is the National Community for Angels, Incubators, and Accelerators. Over nearly 20 years, NACO has emerged as the bedrock of Canada’s entrepreneurial and innovation economy and a national platform for regional inclusion and local connectivity. NACO represents a growing membership of over 4000 angel investors, incubators, and accelerators as they help Canadian entrepreneurs turn good ideas into great businesses. Over the past nine years, our members have made 2224 investments in 1472 companies totaling more than $853.3M of direct investments. As a result, angel-backed companies between 2010 and 2017 have generated $1.66B in revenue and created over 7700 jobs. NACO enables collaboration, partnership opportunities and faster access to Canada’s innovation ecosystem.

Capital BDC Capital is the investment arm of BDC—Canada’s only bank devoted exclusively to entrepreneurs. With $3 billion under management, BDC Capital serves as a strategic partner to the country’s most innovative firms. It offers a full spectrum of risk capital, from seed investments to transition capital, supporting Canadian entrepreneurs who wish to scale their businesses into global champions. Visit bdc.ca/capital.

• A majority of angels that reported data (70%) are located in Central Canada, with 28% in Western Canada and 2% in Eastern Canada

• Investment activity is dominated by the ICT sector (45%)

• Central Canada continues to be the hotspot for angel investment activity with 90% of investments made in the region. Funding Success Funnel in 2018

• 418 companies went through due diligence